Tuesday, October 4th, heralds the grand opening (or re-0pening) of the former Kluge Estate Winery  in Albemarle County, Virginia under a new name,  (can you guess it?)  Trump Winery.  Donald Trump’s son, Eric Trump is President  and Patricia Kluge and her husband William Moses will serve as Vice Presidents of the winery.  Attending the celebration were the aforementioned, as well as Governor Bob McDonnell. The Governor  has played a key role in promoting Virginia wines in the United States as well as Europe and soon will be encouraging business with Israel. According to Todd Haymore,  Secretary of Agriculture and Forestry,  McDonnell and Virginia’s first lady,  Maureen McDonnell are credited  with helping boost Virginia’s wine sales.  The McDonnell administration  passed a program giving tax credits to individuals establishing or expanding wineries and vineyards in the Commonwealth. 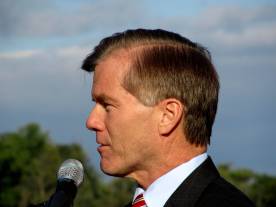 The media were present to photograph, video and ask questions of Donald Trump, and I  found him to be just like he is on television-assertive and gregarious, but better looking in person!  There is no question that Trump knows how to deal with the media.  When asked by  reporters why Donald could make this venture successful when Patricia Kluge could not, he came to her defense in typical “Trumpian” manner and explained that he had the advantage of not having a mortgage! Touche! Another question regarded the intentions of the real estate aspect of his investment .

Mr. Trump  said  he planned to keep the property “high-end”.  When a reporter from The Hook asked about Albemarle House, Donald Trump tossed the question back and asked him if he would want to buy such a big house on such little property! We know who owns the surrounding estate!   He is still in the market for Albemarle House but feels the bank  has it valued too high.

After answering several questions, the baton was then passed to his son for details about the winery itself.    Patricia Kluge joined Eric at the microphone and remarked on her role in the business.  Geraldine Fabrikant, a senior writer for Business Day at The New York Times, interviewed  Patricia Kluge  recently and found her to be, not surprisingly, quite resilient and up to the task of re-establishing herself in the wine industry. Subsequently, Eric Trump stepped aside allowing Gov. McDonnell  to praise the wine industry in Virginia.

Ultimately, Donald and Eric  Trump and Patricia Kluge  plan to expand the vineyards and employ new marketing ideas to the wines and their labels.  They refused to elaborate and left it as a surprise for wine lovers.  Additionally, Eric mentioned the potential for  “hundreds” of jobs associated

with the growth of the winery.

No matter what locals think, the Trump name creates fervor and  excitement in a realtively sedate area of Virginia. I know it  certainly was fun for me to sit in the Trump   helicopter even though I couldn’t wrangle a ride out of the pilot!  The pilot  did however mention that he loved  flying over our  scenic Virginia wine country! 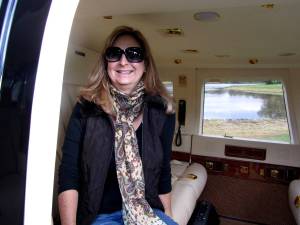 Planning a trip to Charlottesville?  A must-do after visiting  Monicello, home of Thomas Jefferson,  is  the new  Trump Winery and the neighboring  vineyards  owned by Dave Matthews,  Blenheim Winery!