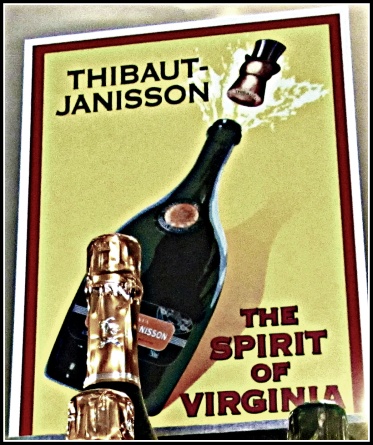 To most Virginia wine lovers, French ex-patriot, Claude Thibaut is well-known for his strides in placing Charlottesville on the map for sparkling wine.  After earning his winemaking degree from the University of Reims and following a 25 year career crossing the continents from Europe to Australia to California, he’s come almost full circle around the globe. Claude was recruited by the Kluge Estate Winery in 2003 as a consultant specifically for their sparkling wine endeavours.  Later,  in 2007, Claude entered into a business partnership with his friend, Manuel Janisson of  Janisson et Fils Champagne (from his early days in the Champagne region of France). 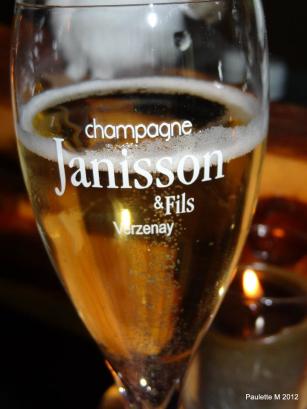 Employing the “methode champenoise”- a double fermentation process that creates the bubbles found in Champagne and sparkling wines, Thibaut-Janisson is now producing sparkling wine served at White House State dinners. Claude has way surpassed his days at Kluge and is garnering rave views from Food and Wine Magazine, the Washington Post and quoting Dave McIntyre: “The T-J (a nice abbreviation given the implied reference to Thomas Jefferson and his love of wines) has become a darling of the Washington restaurant scene, because it is both local and top quality. ”

Bill Sykes, who has worked for the importer, Margaux and Company, joins Claude periodically to help during the bottling processes. Side note- Pamela Margaux, importer, also happens to  be Claude Thibaut’s wife! Bill invited me last week  to peek in on the disgorgement process at Veritas Winery where Claude leases space for his rapidly expanding  venture. Locally, Claude also teaches classes about making of sparkling wines at Piedmont Virginia Community College.  In order to really appreciate a bottle of champagne style wine in might be fun to take these classes and learn more about what and how long it takes to turn out a really good  “bubbly”. I wish I had taken the class prior to observing the assembly line of transferring the bottles after “riddling” and then “disgorging” but I received a very nice introduction to the process beginning with a glass of sparkling wine. 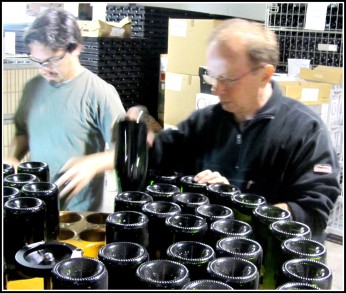 The first step after rotating the bottles is removing the caps that are used in the first stages of fermentation. These caps look like generic beer bottle caps and not very romantic looking compared to the final wire twisted champagne cork one usually associates with sparkling wines. 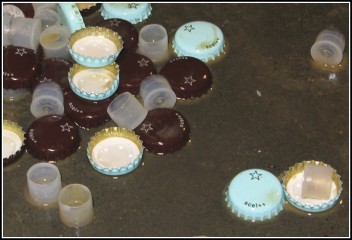 Bill and Claude explained further the process of freezing the lees and then popping out the frozen yeasty mass in the neck of the bottle. 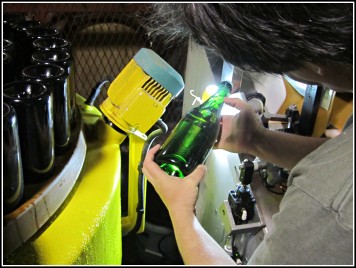 The bottle than moves on to dosage where a small amount of wine or liquor is added to offset the inherent dryness of the wine. At this point, the  dryness or sweetness is determined by the winemaker. The following table explains the adjectives you see on the label. 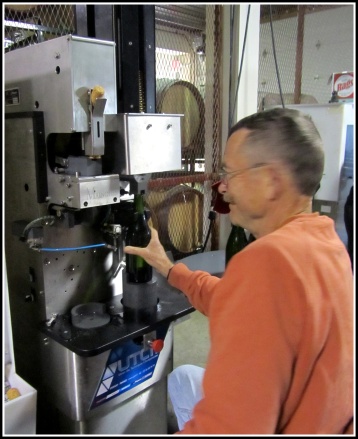 After the dosage step, the bottle is handed off to be corked and wired. Bill is working at the helm of the corking machine above. Finally, the bottle is washed and shaken about 5 times and then is allowed to rest for about 2 months or so…and then we have, voila, sparkling wine!

Last weekend we were spoiled rotten at Bill and Joyce Sykes lovely home with a divine dinner and paired with Thibaut Janisson sparkling wine. What a treat! 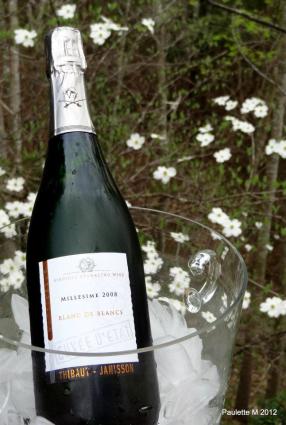 At the top of T-J line is the Cuvée D’état Blanc De Blancs 2008, my personal favorite, extra brut and recently featured  at the Persian New Year Celebration at The Beard House in New York City!

Fizz is a smooth, low-acid pour that works well with food and is easy to sip. Unlike -ultra-carbonated Champagne, Fizz is an effervescent, Crémant-style wine with a slightly sweeter taste than a brut. With its contemporary label and at approximately $25 a bottle is a nice addition for Easter Brunch. I saw a recipe for an asparagus, fontina fritatta that would pair nicely. It also mixes well for Mimosas!

The bottle you’ll find most often served is the Blanc de Chardonnay,  made of 100% Chardonnay from the Monticello Appellation, has vibrant aromas of ripe apples and pear; the taste is balanced, crisp and refreshing.

Final tasting note: You can’t go wrong by complementing your dining experience with a TJ sparkling wine, don’t save it for special celebrations, enjoy the fruits of the Virginia terroir and share it with friends often. Clink!

Special thanks to Bill and Joce Sykes, Paulette Musselman and Claude Thibaut for a special evening.