With careful planning, we managed to arrive early enough to capture a perfect table and an even  more perfect vista for the Sunset Concert at Pollak Vineyards.  Couples as well as children were drawn to the shade trees and the cool pond situated just below the patio and tasting room at the winery.   The band, Mountain Hollow Swingers, was testing, testing, or as they put it, “Check, Check, …Cash, Check or Credit Card! “.

Everyday Gourmet was busy cooking up pork and chicken tacos, but in my opinion, the absolutely sumptuous Muffalettas stole the show !  It appeared they had a successful evening serving up fare to accompany the many bottles of wine making their way out the door.
According to Wikipedia, full moons rise around the time of sunset.    As it moves in orbit around Earth, the Harvest Moon and Hunter’s Moon are special because, around the time of these half moons, the time difference between moonrise on successive evenings is shorter than usual.  Thus, there is no long period of darkness between sunset and moonrise around the time following these full moons.  In times past this feature of these autumn moons was said to help farmers working to bring in their crops (or, in the case of the Hunter’s Moon, hunters tracking their prey).  They could continue being productive by moonlight even after the sun had set.  Hence the name Harvest Moon. When The Harvest Moon lands on the same day as the Autumn Equinox, the Harvest Moon is called a Super Harvest Moon.  This year, it fell one day after the equinox! It was definitely super that night! 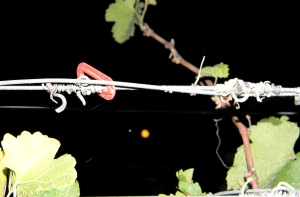 Harvest Moon in the Vineyard

Look for more on Pollak tomorrow!   Too many great pictures to share!